Light bulb bases are usually defined by a letter-number-letter structure, together with the last optional letter. The first letter describes the shape or form of the bulb base; the number(s) represent either the width or distance between the pins. The second letter designates the number of pins or contacts on the bulb. The numbers are normally measured in millimeters. LED light bulb bases are manufactured to the same standards as halogen, incandescent and other traditional lights. An example of a base is the E26, the E stands for Edison screw-in and the 26 means that the base is 26 millimeters.

The beam angle refers to how focused the light is when emitted from the LED. This angle is determined by measuring the angle from direct on-axis to the angle where light intensity falls to half of the on-axis intensity, and multiplying this difference by 2. The choice of viewing angle also affects the LED output intensity. 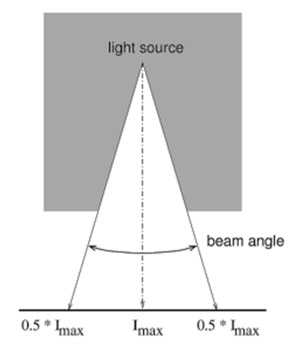 Correlated Color Temperature, CCT rating is an indication of how "warm" or "cool" the light source appears. CCT is measured on the Kelvin absolute temperature scale. 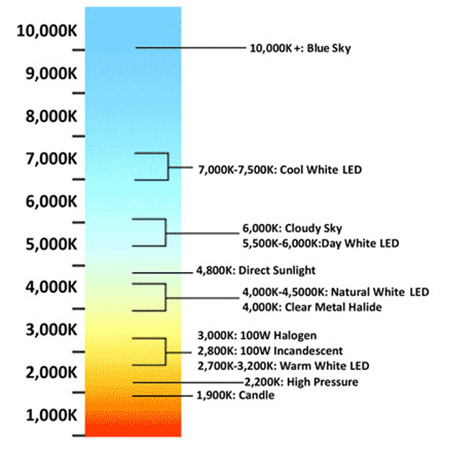 The flow of electrons or holes. Measured (in amps) as the number of particles passing a given point per unit of time. Current can be induced by application of an electric field through a conductor or by changing the electric field across a capacitor.

Diameter of a light bulb is measured in two ways. In the US these numbers indicate the maximum diameter in eighths of an inch. In other parts of the world this number will designate the diameter in millimeters. The diameter is measured at the point of maximum size. An example of a US bulb is the E26, which is 26/8 equal to 3.25 inch in diameter.

A device used to lower the light output of a source, usually by reducing the wattage it is being operated at. Dimming controls are increasing in popularity as energy conserving devices.

A LED driver is a self-contained power supply that has outputs matched to the electrical characteristics of a LED or array of LEDs.

The performances between each LED lights are different. You will not be able to tell the brightness of the lights just by looking at the wattage. In general, LED requires less wattage to produce the desired light output than conventional incandescent bulbs. For you to understand easily, we are converting the light output (measures in lumen) to conventional incandescent bulb so you can get the picture of the brightness.

Lighting fixture efficiency is the ratio of the total lumens exiting the fixture to the total lumens initially produced by the light source. For example, if a bare 100W incandescent lamp (light bulb) produces 1,000 lumens, and it is put into a lamp fixture that delivers 700 lumens, this would be an example of a 70% efficient fixture.

Efficacy is the ratio of light to energy draw (lumens per watt=Lm/W). LEDs produce more light per watt than traditional bulbs. An incandescent light bulb has average efficacy of around 10 to 20 lumen per watt, a CFL has average efficacy of around 50 to 60 lumens per watt, whereas LEDs have average lumens of 70 per watt OR as many as 100 lumens per watt. In simple words efficacy is the efficiency of the lamp to convert electricity into light. The way to interpret this is, more efficient LED-lamps provide more light and use less energy.

A heat sink is a term for a component or assembly that transfers heat, generated within a solid material, to a fluid medium, such as air or a liquid.

Term and symbol (K) used to indicate the comparative color appearance of a light source when compared to a theoretical blackbody.

LED stands for Light Emitting Diode, it is an electronic semiconductor component. If current flows through the diode, it emits light with a wavelength that depends on the semiconductor material.

It is the overall length of a light bulb, typically measured from electrical connection, or base to the tip of the bulb; OR, in the case of T bulbs, from end to end. In common, S stands for short and L stands for long. This measurement can be in metric, inches or feet.

Lumen Output commonly known as lumens, it sometimes also referred to as "lumen output," "flux," or "brightness." It describes the amount of light emitted from a light source that the human eyes perceive. The more lumens in a light bulb, the brighter the light is; therefore, when comes to the point of choosing light bulbs, Lumens should really be the guiding principle if brightness is your priority.

Controlling the operating temperature of the product through design, examples includes heat sinks and improved airflow.

The voltage between two points is a short name for the electrical force that would drive an electric current between those points. Specifically, voltage is equal to energy per unit charge.